Russia. Characteristics of "Russian tournament" type sets are Kings and Queens being very similar in shape and often with finials in opposite colour, Bishops without incision, fat pawns and fat bases.

1st set was bought in 2004 in Istanbul, just 1 year before Hippopotamus ivory was put on the CITES list. Someone told me that in the 1940s these sets were brought to England from French North Africa by soldiers of the second world war. In England these sets would not be uncommon, but I have never seen one there. Seller thought it was a Russian set of the 1920s made of Sperm Whale. But material is 100% sure Hippo and we have this picture 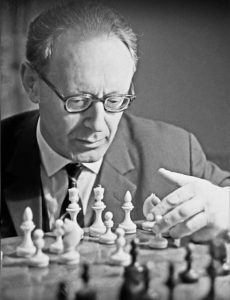 of Botvinnik in the 1950ies (60ies?) with a similar chess set.
Have to say that it is one of my favourite sets, not only because of the material, but also because of those beautiful Knights and the fact that they are very playable due to their stability and weight. Very clear colour difference as well.

2nd one is most likely made around WW2 time (not sure it is pre WW2) and the 3rd is a cheap recent version. The 4th is an amusing propaganda version with politicians. Just look at the pawns and try to identify them all!

Russia. This is a lesser known Carbolite chess set from a factory that used to make Carbolite (kind of Bakelite). The company still exists today. The set has hollow pieces, which are filled with sand (or so) to make them heavier. Note that the pictures of the box are copied from the internet.

Russia. The plastic let me think of the Carbolite set above. and the pieces are made in moulds as well. However, this time very clever in sections of which only the king's cross and knight's head do have seems. The form of the pieces, although not Russian tournament but Staunton, looks a bit Russian as well. So I have put it here at Russia, although it was bought in a Dutch recycle shop.

Russia. The small travel set is most likely a tourist souvenir from Leningrad. Cannot say much about it, but it is from Russian Federation of about 1955. Date based on comparable sets offered on ebay and etsy by Russian sellers. Once offered as being 1970. This set has extra pieces, but misses a black pawn at the end.

Russia. I have added the "Matrioska" set, although you may argue it is more a decorative set. But you can play very well with it. The shape is not only based on the so called Matrioska dolls, but the set is actually named that way as the pamphlet tells us. Sorry, I have no picture of that pamphlet (yet).

Russia. The last in this list is a "Barleycorn" based set by the Chess Sets Gallery, Moscow. The design is by Oleg Raikis, who was inspired by the Barleycorn sets.