Germany. The "Selenus" sets, typical of Germany and Northern Europe, are named after Gustavus Selenus, the pen name of Augustus the Younger, Duke of Brunswick-Lüneburg, author of "Das Schach- oder Königsspiel" ("Chess or the King's Game"), an important chess manual of the early 17th century (1616). 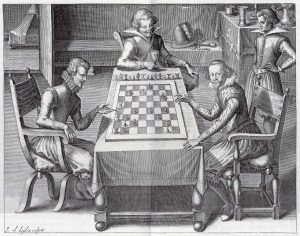 The engraving in that book, showing chess pieces after which the "Selenus" type is named. This type was made a long period and the form has been evolved, but pieces very similar as in the book are made for centuries, as the ca. 1800 Danish and Swedish sets show.

The standard includes delicate lathe turned bases and shafts and tiers with galleries resembling crowns. Pieces were distinguished by heights, the number of tiers and sometimes by symbols. In England they were frequently called "Tulip" chess sets, because of the shape of the middle sections of the King and Queen.

It is difficult to date these sets accurately. They have been made a long period and the shape didn't change that much. My theory, but not proven, is that in older sets the King has only one gallery, the galleries are not pierced, King and Queen do not have the feather finial, or only the King has a feather, bishops have not a flower like top and knights and bishops lack the larger and dcorated disc in the stem. Of course not all of these aspects act always together.

The 5th set, the brownish one, does have Kings with 1 pierced gallery, but I think they originally had 2 galleries. Also the white Knights do miss their collar.

The set estimated early 20th (late 19th?) century is an exception, because it has the old characteristics, except for fragility. Actually I think it is a later reintroduction of an old set. There exist also new Indian reproductions of the "Selenus" type set, which are easily recognizable because they are uncouth and miss the elegance of the antique sets. Unfortunately I do not have an example of it.

These sets came mostly in a small pine box with a sideway sliding lid. I did not make pictures of the boxes always. Set no. 8 is interesting because it comes with associated roll-board and chess box. We have seen such combinations with a "Nuremberg" set as well. Note that the ivory "Selenus" set came in a carton box with compartments for the pieces.

Germany. This lead or pewter set is more a curiosity. I'm not sure that it counts as a "Selenus" type set.

Germany. These 2 bone sets, sets without galleries, are a “Selenus” type according Strouhal, but "Nuremberg" is used too, because the type appears on a Nuremberg pattern sheet of 1840/1850. This type is, in the English world, sometimes called "Spindle" set. Another example is found at the 19th century (Netherlands) page. The 1st set is missing 5,5 pieces! Maybe some replacements too!?

Germany. At last a wooden set which is hard to categorize. Although it was said Polish, probably because of the indication on the box, I believe it is a German set with characteristics influenced by both "Selenus" and "Toy" sets. I think it has been made in same region, and probably by the same makers, as the "Toy" sets, which came in shaker boxes as well.