In England, or better the British Islands, you find the most variety in types/patterns. They are sometimes called after a town or a famous maker. This does not always mean that the set is actually made in that town or by that maker. In other cases reference is made to a famous person or a chess club.

John Calvert worked from 1791 until his death in 1822, after which his widow Dorothy took over until her death in 1840. He is one of the top chess set makers, well known of his beautiful Knights. His "CALVERT 189 FLEET STT" stamp may be found on sets (on Rooks) or boxes.
This very early set, in signed box, is historically interesting because the Knights are in the 18th century manner instead of the later carved Knights. The long thread that connects the head to the stem is also seldom seen. Normally, Knights in such sets are monoblock or connected with a pin.
It is almost certain that the wooden set has been made by Calvert, although it is not signed and came with a box in which St.George sets of presumably Jaques are seen. Most remarkable are the exceptionally well carved Knights, which are made of one piece of wood here. A feature seldom seen in wooden "St.George" type sets.

"Lund" type sets are called after chess sets made by father Thomas (early 1800's until his death in 1843) and son William (throughout the rest of the 19th century) Lund, Cornhill London. We have seen signed sets of both. This type was very popular and has been made by several manufacturers. This particular set is larger, more chunky and has more discs on the pieces as usual.

"Lund/Fisher" type chess sets are recognized by the open worked crowns of the King and Queen. Typically these sets are of large size. The box of this set is small and high, which could be the original box. Sorry, I have no picture of the box yet. The sets were most likely made by William Lund, although Samuel Fisher is listed as an Ivory Turner in the mid-1860's, so he could have made these sets as well.

(John) Jaques of London is probably the most successful maker. At least longest existing, from 1795 till the present day, and run by the 8th generation now. Most famous, of course, is the "Staunton" pattern, which was patented on March 1, 1849, by Nathaniel Cooke, 198 Strand, London.

John and Nathaniel were related by the marriage of John's son John (II) with Nathaniel's daughter Harriet Ingram. Cooke was proprietor of "The  Illustrated London News" (1842-2003) in which Staunton had a column. As far as we know, Howard Staunton was the 1st sportsman to give his name to a product. It is not certain who is the designer of the Staunton pattern. It is not Staunton and probably also not Cooke. Most likely did John Jaques attribute to the design.

The codex of Frank Camaratta is an attempt to classify Jaques Staunton sets and the names "Anderssen" and "Broadbent" are from that codex and not names given by the Jaques of London company. The codex, however, is far from 100% decisive and Staunton connoisseur Alan Fersht does not use it any more (he left it out in the 2nd version of his book).

Next to "Staunton", a lot of other chess set patterns is found in Jaques famous pattern book: "Barleycorn", "Calvert type", "Dublin", "Edinboro Upright", "St.George", etc. Jaques did invent and make a whole lot of other type of games as well. Below a few pages from their famous pattern book, what they are a bit mysterious about.

Jaques made travel sets of the "Whittington" type in sizes of 6-8-10-12 inch. I have several Whittington sets, but none are signed. See Travel (England) page for Whittington type examples.

Jaques made these "In Statu Quo" chess sets in different forms. There exists also a larger version. This one is an early example, with places for captured pieces, which dates it from 1857 onwards. The pieces are ivory, which was an option I believe. By default they were made of bone. That this is an early set, around 1860, can be seen at the very thin pins that easily bend if you lock the pieces while not completely down. Maybe that is the reason that Jaques switched to pieces with significantly thicker pins. Also the holes in the board are smaller, because I noticed that pieces with the thicker pins don't fit well and only can be placed with brute force.

F.H.Ayres. The business and factory of Frederick Henry Ayres, manufacturer, was started 1864 and from 1865 located at 10 Baldwin’s Place, Leather Lane, London EC, then from 1869  at 71 to 75 Red Lion Street, Clerkenwell and finally from 1877 at 111 Aldersgate Street, London, EC. It became F.H.Ayres Ltd. c1905 (known mainly for outdoor games). Later taken over by Slazenger (c1948).
F.H.Ayres made a range of different sets. Here some examples. Other sets of F.H.Ayres, like Barleycorn can be found at other England pages.

Asser & Sherwin, makers, 81 Strand, London. Grandfather Thomas Sherwin (1776-1863) was originally a bookbinder, but became a backgammon table and chess board manufacturer in about 1820. Father Thomas Sherwin (1802-1881) was also a dealer in games. Charles Sheppard Sherwin (1833-1872) formed in 1860 a partnership with his cousin James Asser (1836-1924) - 'Asser&Sherwin'. They traded until 1882 (despite the death of Charles Sherwin in 1872) at premises at 80-81 Strand and Oxford Street, selling travel goods, 'fancies', games and sporting equipment. Charles death certificate describes him as a Bagatelle Board Maker. On the closure of the company James Asser went on to found Turnbull and Asser the Jermyn Street shirtmakers. Recently (Sep. 2020) I found a lid of a box with their logo. I have only the lid and no box. Also don't know what was in the box originally.

Thomas De La Rue 1st commercial venture was a newspaper on Guersney in 1813, but moved the printing business to London in 1821. In 1831 the company started to make playing cards, a division sold to John Waddington in 1969! In 1855 it started to print postage stamps and in 1860 banknotes (for Mauritius). In 1874 they opened a new factory in Bunhill Row, London. In 1881 they entered the pen market. In 1898 the family partnership structure changed to a private company and the De La Rue family left the business and the company became publicly owned. Today their main business is banknotes and UK Passport. On De La Rue site is a lot more of information. 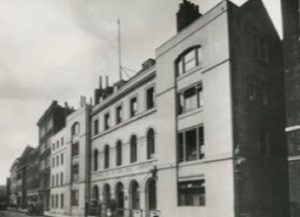 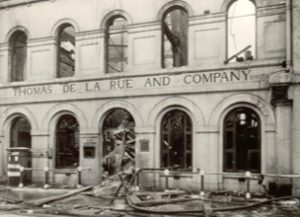 The name on the building is: "THOMAS DE LA RUE AND COMPANY". Pictures are unclear, but 2nd one seems to show a small "Limited". I could not find out if "Limited" was added in the period between the 2 pictures or was there from the beginning.

The origins of B&Co. are unclear and research didn't reveal much. What can be determined, based on the style of the chessmen and their boxes is that B&Co. started producing Staunton chessmen in the mid to late 1850s. Stampings are found on their extremely scarce, but beautiful, "Regulation Chessmen" which come in signed box. B&Co. sets are rare. Note the King without cross.

There are a lot of other makers or retailers, like Asprey, J.Barr, BCC (founded by W. Moffat and W. Hughes, making chessmen from 1891 to about 1907, well known by the use of Xylonite, a celluloid), H.Dixon, C.Hastilow, W.Howard, W.Leuchars (probably the 1st retailer of Jaques Staunton sets), Wedgwood, R.Whitty, to name a few. I do not have examples of all of these makers/retailers, but you can find some of them elsewhere on my site.

Here some "Staunton" sets of unknown makers. The large 41/3" (11.1cm) ivory set is a beautiful set, but someone wanted us to believe it is made by Jaques and crudely marked it as such, but it is not a Jaques set. Unfortunately a discovery after purchase. Another imperfection is one white Knight that's missing a little piece of its jaw. The box is not a chess box, I think, and is not in best condition. The 32/3" (9.3cm) bone set is rather scarce. It is very much rarer as wooden ones, and even more rare as the ivory ones, especially in this size which is large for a bone set. I think the box it came in is original. The 21/2" (6.5cm) small wooden set is also of an unknown maker, but is not that uncommon. Note the King without cross.

20th century makers Mildred Rose and Britain made lead sets based on the "Staunton" design. You find them on "The Rose Chess" and Britain pages. A set from K&C Ltd. in London is not in the collection. On the Plastic page more "Staunton" sets of manufacturers like Grays of Cambridge, Chad Valley and House Martin. Some of unknown makers as well. On the latter page is a plastic travel set by F.H.Ayres as well (see also Travel  (England)).